Welcome back to blogging. LOL. That welcome is for me as well since I have been absent for a few days. Today I am ready to share another excerpt from Dawn of the Dragon. Don’t forget to let me know what you think in the comments below. If you have not read Palera Dawn, order your copy today. Dawn of the Dragon is book two in The Dawn series.

The air was crisp and chilled as I turn to glare at my darling wife, Molly. For today is to be a special day. Today is the twin’s birthday.

Ten years old now, I whisper to Molly as she opens her eyes and complains of the cold. By the feel of it, my husband, summer has ended. Yes, it has. Wishing for one warmer day for the children that would not come.

With cold feet, I carried a candle over to light a fire. Fire is now needed throughout all of Toan. It may take one or two moons before the entire castle feels the warmth. I will hurry the Clans to ignition.

“Wonderful, but what time will the festivities begin?” Molly asked.

Knowing I had no choice but to answer, I begin to move my tongue to say what she would not want to hear.

Unfortunately, my love, there will be no festivities for the King has summoned me to Mason for a meeting. Molly hated Mason as did I, but there was no choice but to meet the King’s demand. Many moons ago my refusal cost me, my wife and my three sons.

The sweet smell of lavender rice reminds me of her standing in the middle of the kitchen stirring over the open flame while the laughter of the twins often reminds me of my boys and the fun games they played. I had plans for my sons to grow into strong men, but that was taken from me by a murderous tyrant.

I will never forget the horrendous sounds of their screams and the smell of their burning flesh as I stood powerless to stop it.

My thoughts are for you and me and the twins to make our way there. They have not been on an adventure in a while. This could be their birthday present.

Molly frowns with disgust in her eyes. On the first day of winter, you want us to travel the road with the children no less to the horrid Mason.

The cold has manipulated your mind, my Lord.

Placing my arms around Molly, I assured her a safe journey but also breaking additional news at the same time.

My lovely, I must tell you something more. Five Forcers deserted their duty post making their way here. You know the law, and I must uphold it. You have a strange way of upholding the law Hiddard. You know I am being watched and can’t take any chances with your lives. I will do what I must.

Forcing open the door and letting out their kindest laughs were the children.

My loves, what have we told you both about knocking? Laughing as their father tickled them both was their favorite. Sundo and Celest hug your mother.

“You both give the warmest hugs. Happy birthday!” Molly exclaimed.

“Yes! We are ten now.” Said the twins in unison.

I have a surprise for both of you. We will be going on a journey to Mason.

Up and down they went as they had been yearning to leave the castle.

Molly smiles and grabs them both.

Now, Nanny will help both of you pack a bag with warm coverings for the road.

Their joy filled the air as they hurried for the door.

Sundo, wait for a second son.

You are now ten years old and considered a man. As a man, you must attend to your duties. For right now those are my duties. Son, five people broke the law and now they must pay the price. You will accompany me and my men to the Pit where justice will prevail.

Sundo had heard of his father handing out justice before but he did not clearly understand.

I dressed in layers and finally placed my black fur cloak over myself.  Sundo was ecstatic as I handed him a matching cloak.

I met up with three of my men and we made our way to the Pit.

You can feel the dread in the air. The Pit was where men and sometimes women awaited to be transferred to Mason to fight in the games.

Hundreds of moons ago, the Bolong family guarded the Wall but wanted more. They were bored so they decided to bring a proposition to Fefinar, Guardian of the Keys by way of Queen Palera. Fefinar had much power, but he did many things in secret. In secret, he created the games. He supplied human capital by buying men and women from outer realms.

They would fight to the death and Fefinar and the Bolongs collected gold by placing bets with the Ta’l Bank.

Now, the Bolongs still run the games, but for the entertainment of the Realm. I am a responsible supplier, a job I despise.

Here now I must adhere to the duty of executioner. Anyone who deserts their post or tries to escape their military position within the Force is sentenced to die.

My taller man opened the gate to the cell the men were being held in.  All five were scrawny and filthy. One called out for water while the others seem to have accepted their faith.

The men were lined up in front of a stoned gigantic Titano Boa snake parched above arenas the insignia of the Larks House.

Feeling sorrow in my heart I glared into their young faces thinking of my own son who was about to witness the King’s terror.

“Whatever you do, do not drop this sword and do not look away.” The man ordered.

“I Lord Hiddard Larks, the executioner of the Zaylen Realm sentence you to die by my hand. Do any of you have last words?” I ask.

The young man whom asked for water responds.

“This Realm is cursed with a dark spirit that can only be healed by dragons! He is coming, and he brings the morphs of death with him. I saw them. I saw his army. These men are afraid, but they saw him to. He searches for the one who will bring forth the dragons. Their appearance can only mean one thing.

I release my black sword made of magma glass. With one swing, their throats were slit with cuts so deep their heads rolled from their bodies.

Sundo did not look away nor drop his sword. He had a proud look in his eyes, and careful not to speak to me just yet.

“Give them a proper burial.” I command.

Taking the hand of my son, we headed back towards the castle. I could feel him wanting to question me but silent he remains.

A.H. Washington is the author of the debut novel, Palera Dawn. As an elementary and middle school educator, she has spent the past decade writing fiction stories independently and with her students. She spends her summers with her husband and children. A.H. Washington is a fan of Dragon and other fantasy, science fiction conventions. She lives in Atlanta, GA. I am a woman with many things after my own heart. I love children, so of course, I work with them as a Special Education teacher. I enjoy the collaborative efforts that are involved in working with the students, parents, and classroom teachers. View all posts by AH Writes

One thought on “Creative Tuesday: Excerpt from Dawn of the Dragon”

This site uses Akismet to reduce spam. Learn how your comment data is processed. 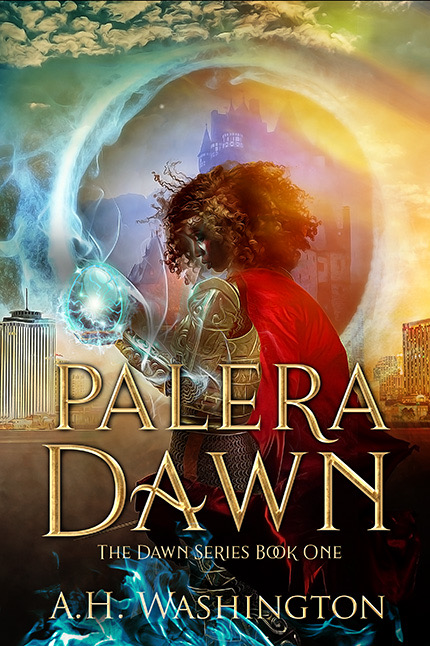 Check out my Pages!